Planning for the yearly hiking trip, GR wanted to take one more run at Sky Pilot. This is the highest mountain in the Howe Sound group of mountains (2025m, 6600ft), protected by the Gendarme, with Copilot to the south and The Ledge to the east.

GR said this was 'sweet spot' in time. The building of the Shannon Creek Gondola has opened up a service road that takes you far, but the Gondola is not there yet, so time to take advantage of the road and beat the crowds. Also the weather looked like it was going to co-operate, and other life pressures were going to get in the way soon, so seemed to be a good time.

The new trusty Hyundai did an admiral job of dragging us up to km 9, starting on the Mamquam service road (note: not Mamquam Road that is at the other side of Squamish and takes you up to Diamond Head) just past the Chief, then another service road (to the right) at about km 3.  A bit dodgy at times, but got to the gate at about 9am. 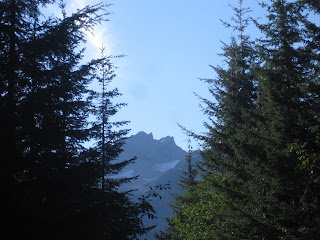 Sky Pilot from the parking lot.

From there, broke out the bikes, rode on, taking a left at the building site of Gondola, then up as far as we could with the bikes. Stopped and locked up and then the fun began. 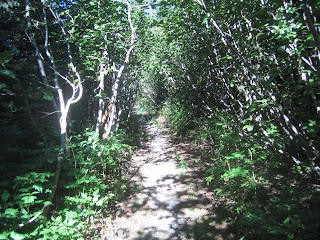 Nice hike through some alder copses, streams, mores streams masquerading as trail, a 'hidden world' area, then on to the real work. An hour of straight slogging scree, reaching a pass, and looking beyond to Stadium Glacier. 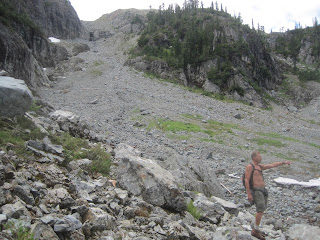 Onto the snow, should have brought some crampons or at least some poles, up another hour. Finally up into the rocks and the approach to the Sky Pilot. 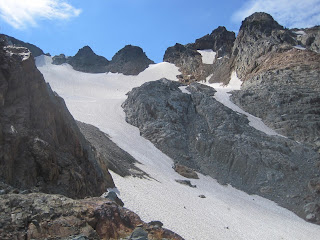 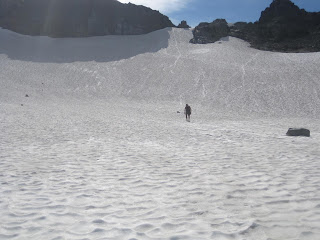 But here's the close-up
One of the barriers to Sky Pilot soon arises, the crux of the route, the 'Pink Slab'. This requires some first class (my term, officially I think it's a Class 4 scramble) scrambling to get over. I was told that this was the only real challenge. Not so, there was still some scrambling to be done.

A bit of decision making as to routes, but fairly obvious after looking around a bit. Came up the West Ridge, with at least one challenging chimney climb, achieving the West Ridge peak. From here, even though we were really close, we couldn't see Sky Pilot, as the Gendarme was in the way. A tricky little drop down through some trees, around the Gendarme, and another 20 foot chimney led to an easy walk up to Sky Pilot peak. Nice. 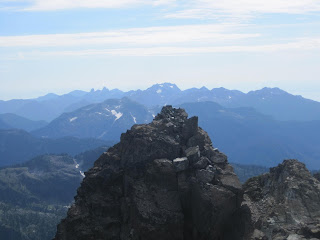 The Gendarme, facing south from the top of Sky Pilot. See the twin ears of The Lions at 11o'clock.

There was talk on our way up of the 'traverse of doom'. We think we missed it. Good. Also, it seemed that some of the trail cairns we met on the west ridge were the confluence of a number of paths. We thought they were other ways up to the Sky, but I think they were other ways down. It appears that another way of climbing Sky Pilot is through Gunsight Gap, from which the approach is from the south and is quite steep. Our approach bypassed the Gunsight Gap, was from the south west and seemed reasonable. 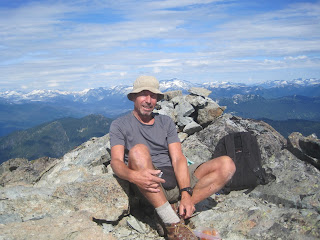 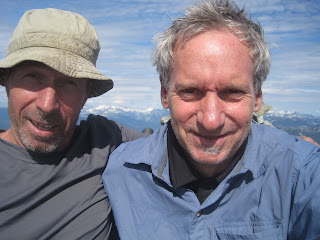 Having said that, we decided on not trying other trails down and retraced our steps. We saw a little shelter on top of a plateau just off the west ridge peak. Someone has spent some time up here. 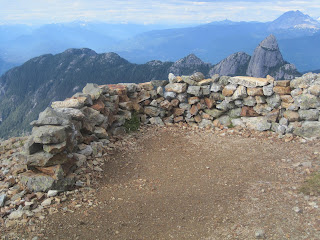 Habrich (Hayseed) mountain at 2 o'clock. Garibaldi behind that and Black Tusk way in the back.

Eventually got back down to the bikes parked just past the alders. Unfortunately I had a flat tire, but fortunately it was a slow leak and I had a pump. So, two pump-ups later we were back at the car at 7pm.

Nice trip. Perfect weather. 5 hours up, 4 hours back. 10 hours car to car.  Looking back, the car and driving up to km 9 was the trick that allowed these old geezers to make the Sky in one day. When we parked, we were looking down on the Chief. We had already climbed a significant amount. It's  always good to get as high as you can with the machines before starting to hoof it. 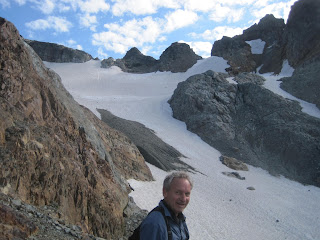 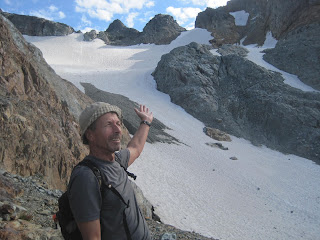 Epilogue: Dumb and Dumber. Driving down the 9km of FSR to get back the highway, talking of burgers and beer, we met a couple walking up the FSR between km 7 and 8. We stopped to chat. They asked for directions, "what was up that road, houses?". Uh, no. Eventually it came out that they had climbed the Chief, went to the third peak, and then somehow kept going and came out on the FSR. First they started down, but then decided to go up! We decided not to ask too many questions and gave them a ride down to their truck. They declined any food, but happily sucked back the extra water we had, they had already been drinking from streams.

During the conversation we gently tried to steer them to the idea of traveling with such things as water, clothes, a lighter, phone, etc, but it didn't work. This was a big adventure. They had planned on huddling together overnight if they didn't find anything soon. When we found out they were from Steveson, GR said, 'Oh, your flatlanders...'.  We were going to drop them off in the Chief parking lot, but they excitedly saw their truck and asked to be dropped off. Pulled over and they jumped out and ran across the highway. 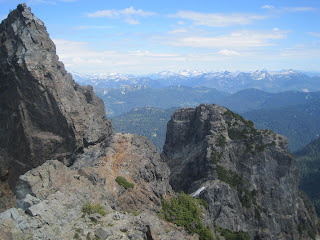 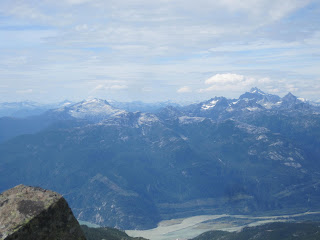 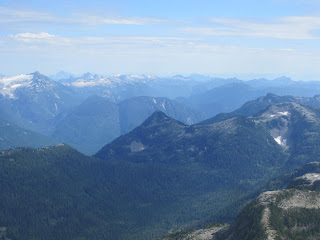 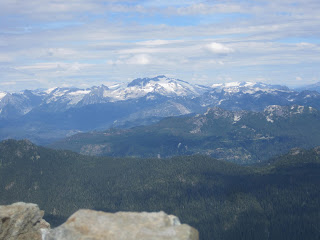 
Good  map from ClubTread: We took the blue route marked.