Plan A was Mount John Clarke (also see John Clark), but for the second year in a row, it didn't work out. Last year it was the Squamish Valley fire that stopped us. This year it was our own folly: we got the directions wrong and when we finally figured it and got on the right road, it was washed out! Oh no. Maybe next year... 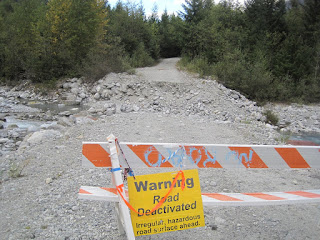 So, GR digs into his memory and suggests Brandywine Mountain as an alternative. I'd been to Brandywine falls, and didn't think it was worthy of a big effort, but fortunately this turned out to be different.

We drove out to the highway to get a signal and look it up. No problem, except it's starting to get late. We had borrowed a 4x4 for the trip to John Clarke (thanks Dragana), and so we used it to get most of the way to the upper parking lot. There's a lower lot for non 4x4s, but his adds about 5km to the hike up to the meadows, so we were glad to have the 4x4, otherwise it would have been a late night.

From here we had an easy 1 hour walk into Brandywine Meadows, arriving about 6-ish,  where we setup camp for the night. 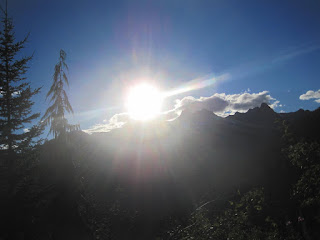 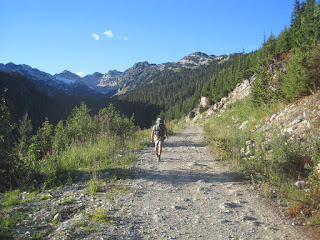 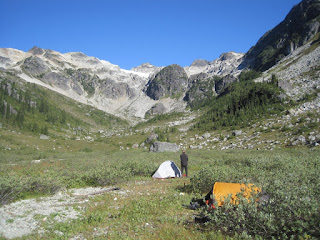 We knew we had it pretty easy the next day (12km, 6 hour hike), so enjoyed the beautiful, quiet night in the meadows. We watched the big dipper set in the crook between the mountains, and the moon set, casting a moving shadow up the slopes. We were the only ones in the middle of the meadow (saw some others the next day that were camped at the north end). 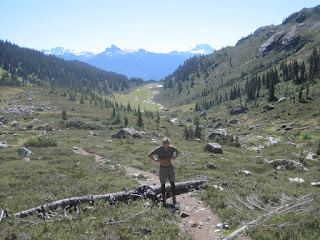 After a leisurely breakfast we packed up, hid the big packs, donned the day packs and set off at about 11am. Talk about lazy hiking. 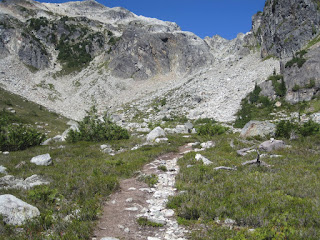 We followed the stream north through the meadows, then sloped up the rise to the west. There seems to be more than one way to get there (sort of a choose your own adventure), but we sort of followed the 'general consensus' route, although if you keep things in perspective, you can't go wrong with the route. 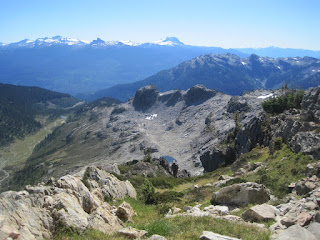 Looking back on the Brandywine meadows. GR emerges from the crevice. Black Tusk way in the background.

There's a real mixture: nice scrambles, boulder fields, narrow crevices, scree fields, but nothing too challenging. You can really see the effects of glaciers throughout this entire area. 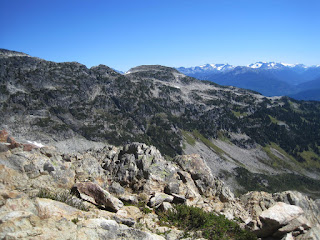 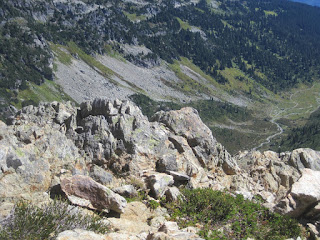 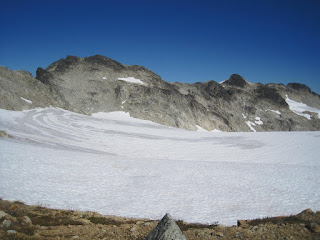 We managed to mostly stay off the snow fields, but used them as shortcuts a few times. This was probably because it was late in the year (Sept). Other trip reports mention and lot more time on snow.  There's a few false peeks before you reach Brandywine peak. Maybe we didn't need to climb them, but that's the way we went. 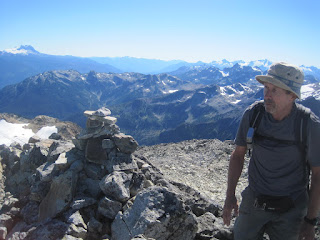 The peak is old clattered rock, very small, a real peak. No real place to hangout right on top, so we took our top-of-the-world lunch break in a lee a few feet down from the peak facing NW.

Some of the guide books say this peak is the best bang for your buck for views(effort expended vs views experienced), and I would tend to agree. Beautiful 360 view. See another TR report below for some great hi definition pics from the peak. 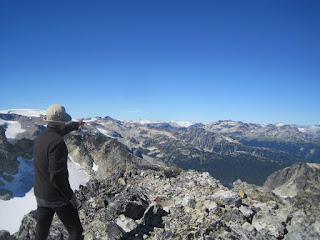 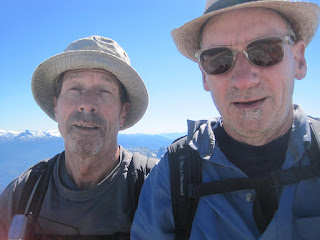 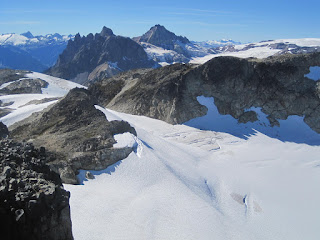 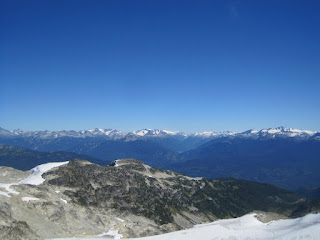 On the way down, I choose a different route. As mentioned, there seem to be a number of routes to top. This one was probably more direct, but much steeper and more loose scree (yuk). Met up with GR about half way down and continued down the long gradual slope to the meadow.

Walked past a number of tents setup at the north end, then found our packs and down to the Jeep.

All in all an great experience. John Clarke still awaits, but we'll take Plan B for now.

Addendum:
Brave or ???. While collecting our packs (about 5pm) in the meadow, we met a couple who were just hiking through. They were planning on peaking and returning to the car the same day (it took us 3 hours to the peak from were we met them). They were much younger and faster than us, but that still would mean peaking at dusk, descending to the meadows as it gets dark, and full darkness back to the vehicle. Yikes! I try not to give advice in these situations, but managed to get out that I wouldn't be doing that!

Great pics from the top from another TR: http://forums.clubtread.com/27-british-columbia/58257-brandywine-mtn-june-7-2015-a.html