GR and I decided to do a double whammy this year: Howe Sound Crest Trail plus Hanover Mountain.I had always wanted to do the HSCT and Hanover is the last of the Howe Sound mountains for GR to bag. So, game on. 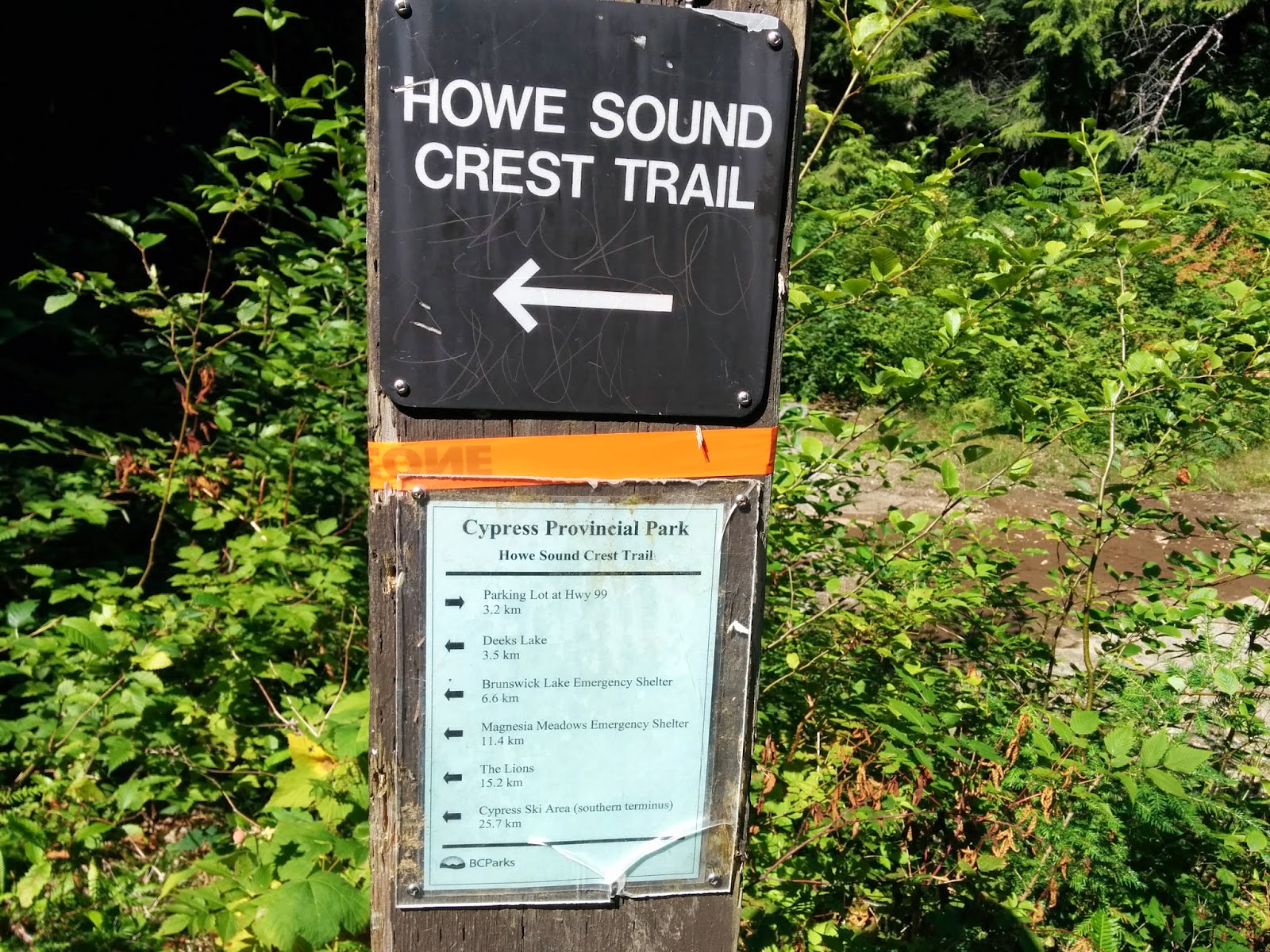 Day 1 - Porteau cove to Brunswick Lake.
Got dropped off at Porteau cove at 10am. Hiked up the gravel road and trail and arrived at Deek's lake around 1:30pm. Had a nice cold swim and relax before moving on. 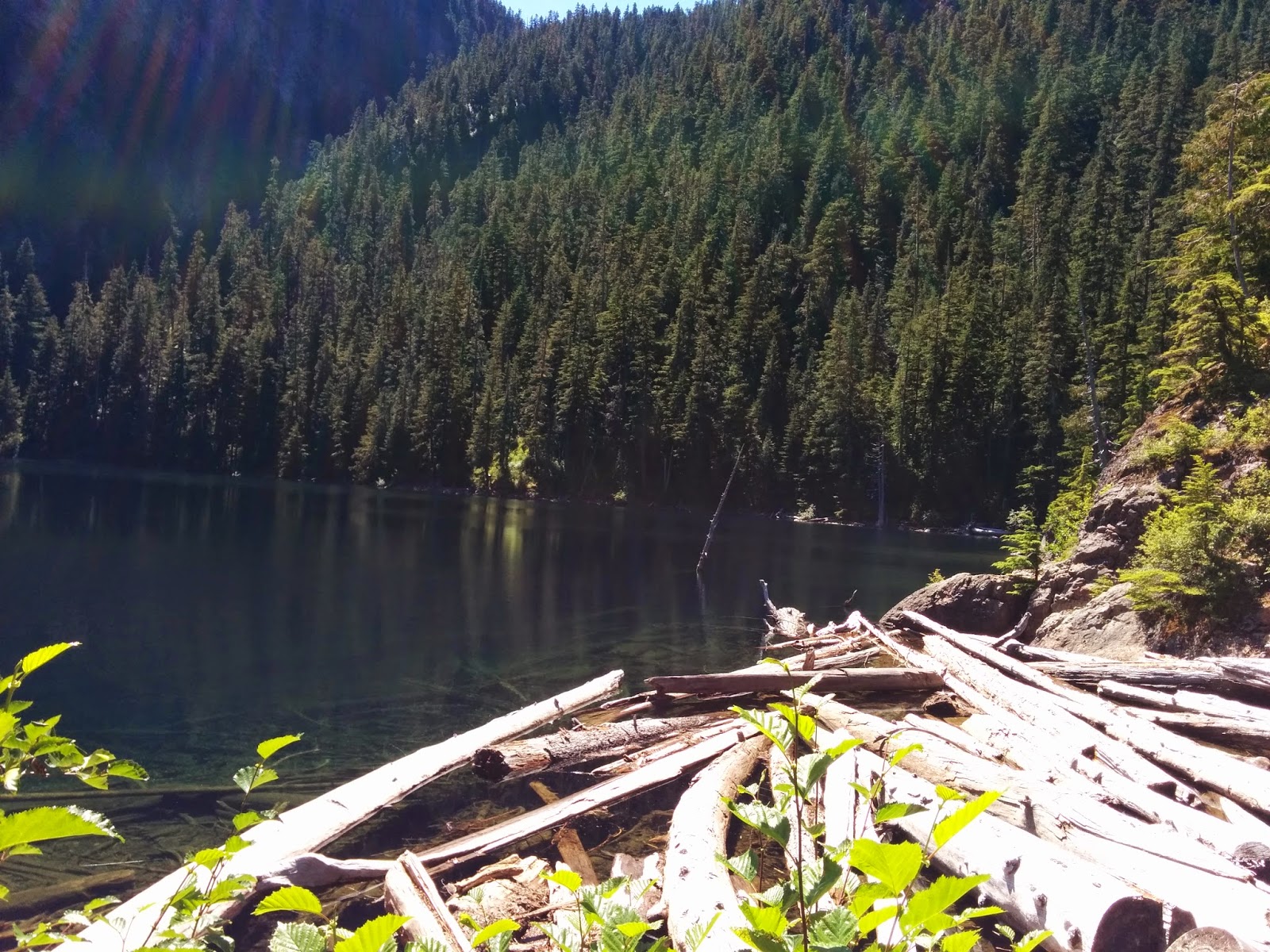 Left Deek's around 3:15, nice walk up the creek, past Hanover lake, then on to Brunswick arriving at 5:15pm. The hut is a couple of hundred meters above the lake, with a beautiful view of Brunswick lake to the east. GR stayed in the hut, I set up my tent. Had the place to ourselves. Beautiful night watching Brunswick lake change through a range of blues, darkening as the night went on.

Day 2 - Hanover Mountain.
Left camp at 8:45. Hiked 30 minutes up the trail to the offshoot to Hanover. Left the main backpacks and started up towards Hanover. Not much of a trail, hard to follow. Up the scree field to the twin chutes. Lots of talk on the web about which one to take. Big chock in the right, so GR decided on the left. Lots of challenges up this chute, a few ropes to help a long the way. Arrived at the top at 12:15.

Met a couple on the way to the meadows, then camped beside them. They told us where the water was, a small questionable tarn, but GR found a stream a bit to the north of the hut. Going south, Magnesium Meadows is the last water. We found this out from a number of people hiking through. Stock up here if going south. 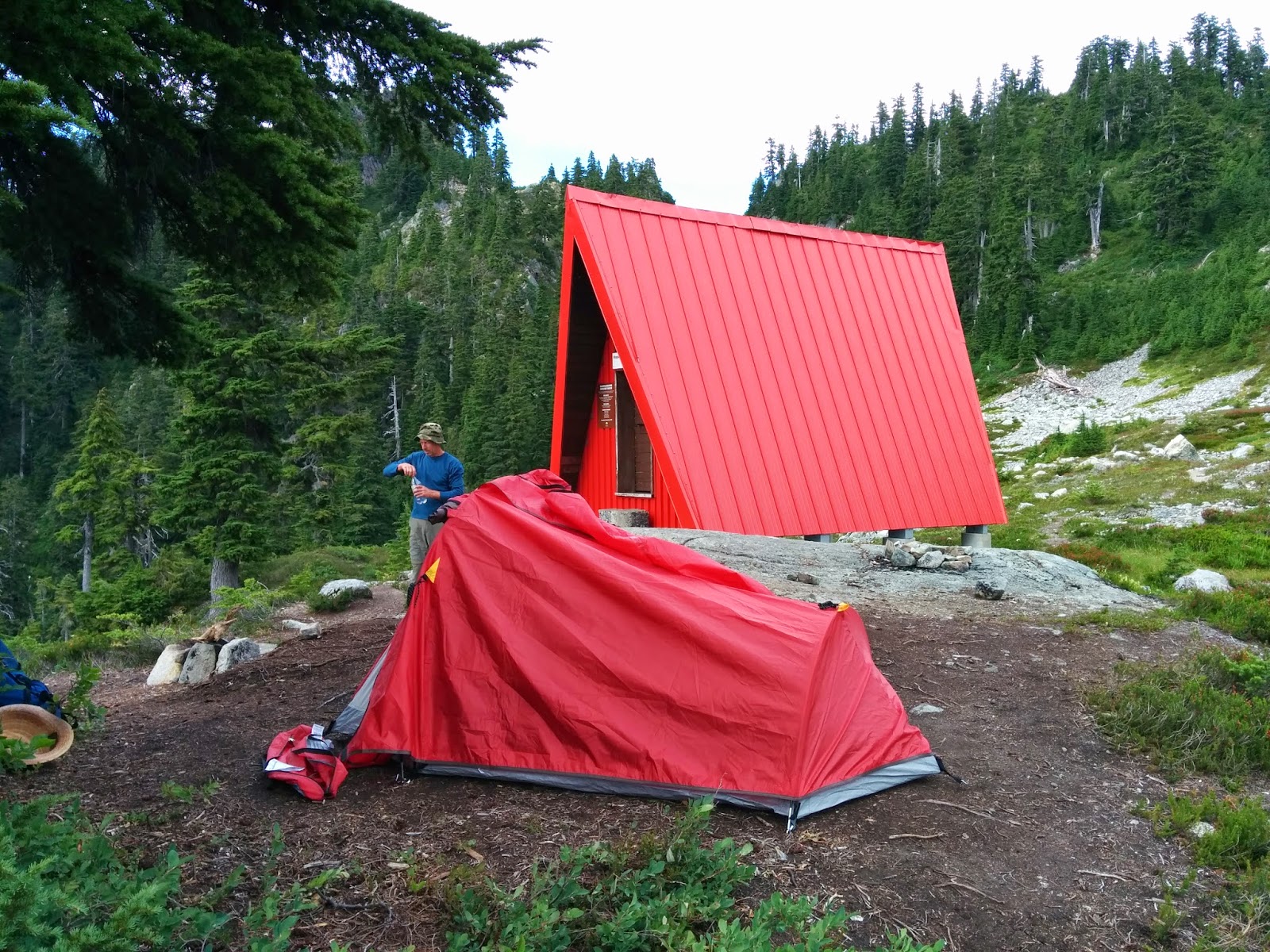 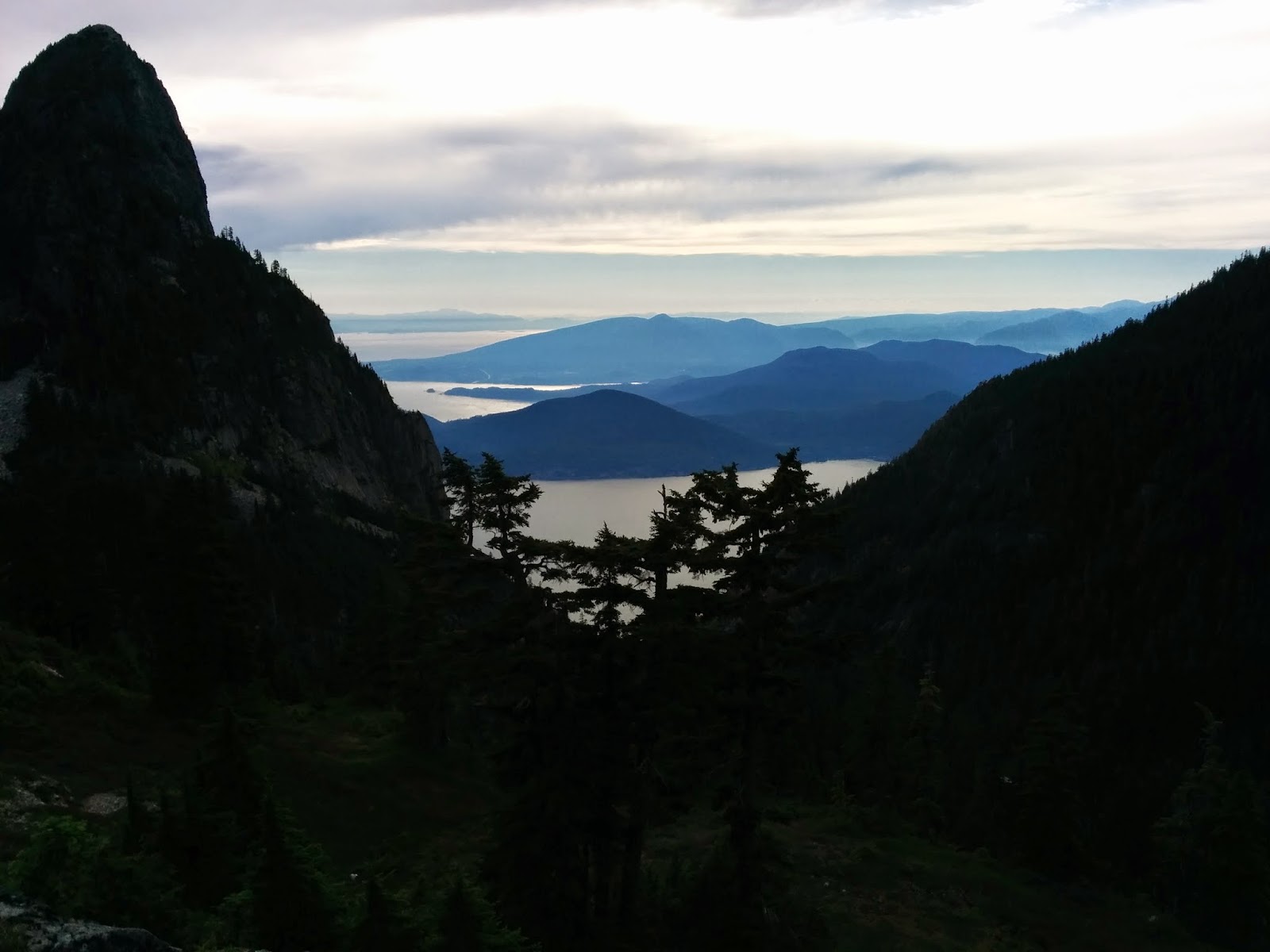 Day 3 - Magnesium Meadows - The Lions - Cypress.
Left camp at 9:00, just like punching a clock... Long hard day of up and downs, arriving at Cypress parking lot at 7:30pm.

First, across the Harvey saddle, around David, and on to nice climb up James peak. Nice place to camp on the col between David and James, but, no water. Red shale at the top, but eventually found the trail down, then up again to Thomas. The twin peaks of Thomas have a rope and chain to help. Good idea. Straight down on the south side.

Down again then up (seems to be the theme of the day) to the Lions. Arrived north side of the Lions at 12:15, followed the trail through the twin peaks, then up the south side of the west Lion, a nice little bit of cliff hanging on the way.

Arrived at the north peak of Unnecesary mountain at 1:15 for lunch. Left again at 2:15. Unnecessary goes on forever, up and down at least 3 times. Completely unnecessary. Finally a long descent. The notes about the HSCT trail say this descent (ascent if going north) is 200 metres. It's a lot more than that. From there on out, it's a piece of cake. Gentle climb up to St. Marks peak by 5:30. Last half of the trail back to Cypress is gravel, and it must be new route, as it bypasses Strachan Meadows. Arrived at the lodge at 7:30pm.

Thanks to the kids for pick up and drop off. 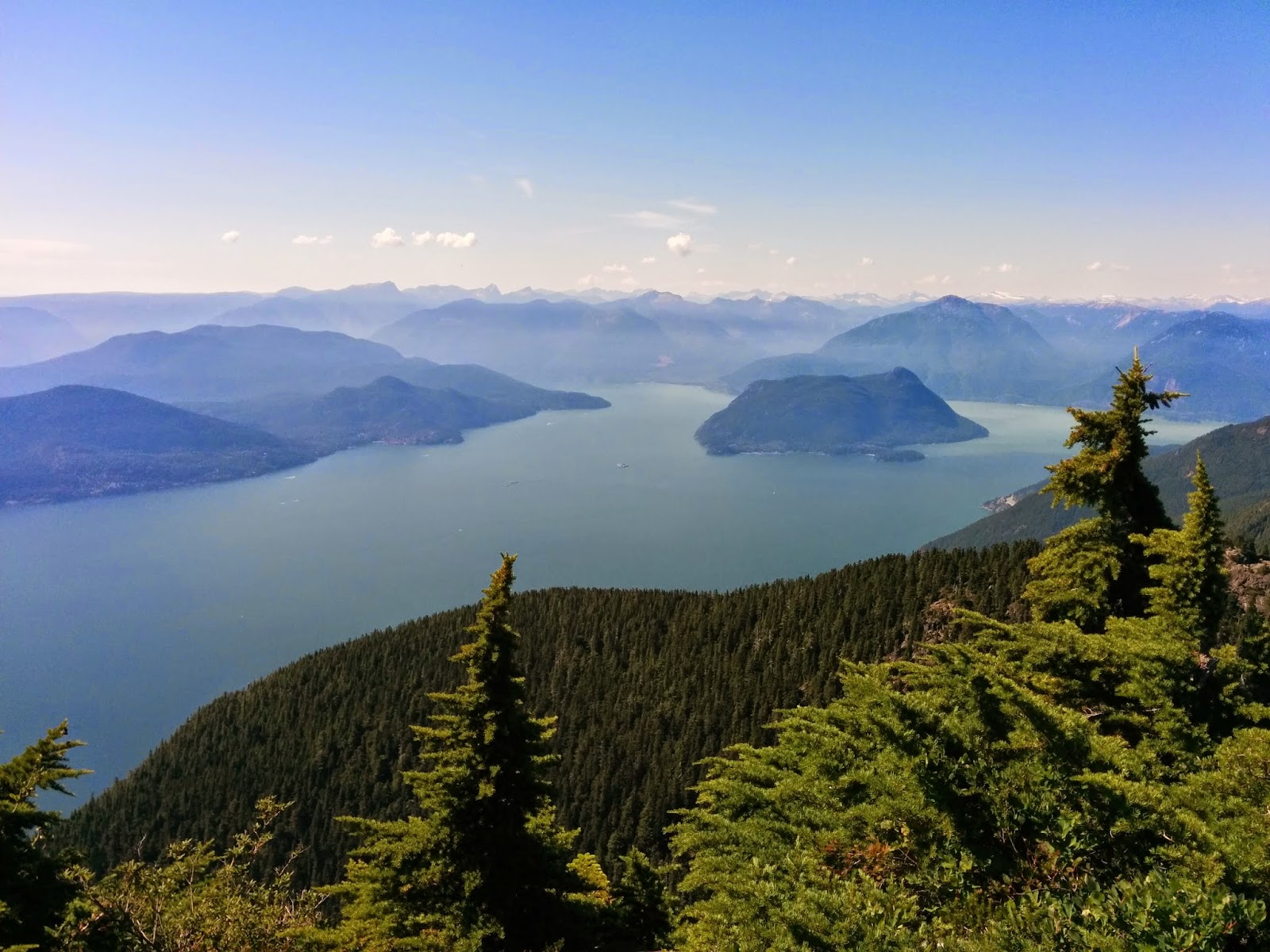 Addendums:
Route: The recommended route is from south to north, ending at Porteau Cove. The rationale is the climb up from Porteau to Deeks Lake. But it seems to me the climb up Unnecessary is just as bad (or maybe I was just tired).  We did the opposite. Up from Porteau. The main purpose of this was to get a good start for Hanover. It was the perfect setup. Day one a 5 hour climb, then rest up for the push to Hanover. Nice.

People: Most of the people we met on the trail were experienced. Good to see people out there that know this incredible trail. A few cases of people who were completely out of their depth, but didn't know it.

The first was couple of guys who were planning on walking the whole way through (29km) in one day. When we saw them just north of the Lions, one was already looking shaky in running shoes. Yikes.

Another was a group of 6 on Unnecessary mountain. They were planning on making Magnesium Meadows (another 5-6 hours), but from what I could tell, it didn't look good. Slow moving and no water treatment gear. They asked GR if there was a water pump at Magnesium... I gave them 8 of my chlorine tablets, which would only be good if they got that far.

The last group were 3 smart young guys. Met them on the north side of St. Marks. They were planning on going to the Lions but had already finished their water. I guess I had already encountered the previous two groups where I had bit my tongue, so this time I said in my best soccer-coach voice: "No you're not". Maybe they recognized the way I said it, or my follow-up about times, but they said: "Yeah, thanks man, I guess we're not", happily turned around and went back. The smartest ones are those that turn back.

The trail: This is an incredible trail. Whatever group had the vision to make this happen, thanks. It's not for the faint of heart, lots of exposed sections. And remember it is a 'crest' trail. It crests everything in its path.

Mountain names: I don't know much about how mountains get named, but it seems to be with a sense of humour. In this case, we have peaks called Mark, Thomas, James, and David, all good Christian names, thrown in with The Lions. Hmmm...