I really outsmarted myself on this one. I didn't plan this or think about this beforehand (not sure why), but this is all downhill. Nice. Start at the top of Cypress and end up at the neighbourhoods on the way up to Grouse mountain. Probably about an 800 metre loss of altitude. That's why it was so hard going the other way the last time I did this leg. 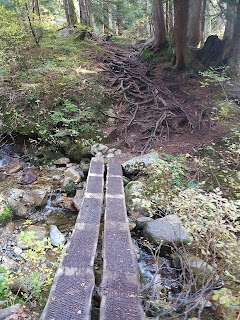 The trail starts close to Hollyburn lodge, and takes a nice run part way up Hollyburn mountain where it joins the cross country ski trails. It's a bit strange, as you could probably start at the cross country parking lot, but that would be cheating.

It's funny walking the cross country trails that we skied so many times with the kids when they were young. The hills look so small. They seemed so much bigger then.

After leaving the Cypress area, stopped off to see a few lakes just off the trail: West lake, and Blue Gentian lake (I loved the name, but the lake didn't quite live up to it).


After the lakes, there's a long slow descend going east. There seem to be a number of other access points to this trail. One of them being the 'Crossover Trail'. Someone has built a little bridge there using the old technique of splitting cedar into planks, rather than sawing. Good to see. 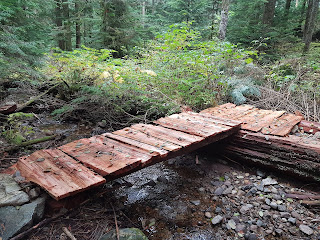 Not too far from here, the trail joins with the Cross Canada Trail, and pretty much follows the power lines east to Capilano Road. However, there are some interesting points. I remember the following steps from a previous hike.
On the left, from Nov 2017. On the right, this trip. 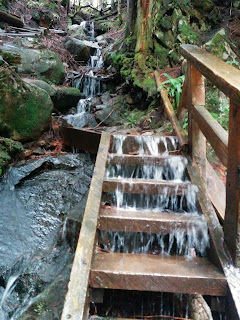 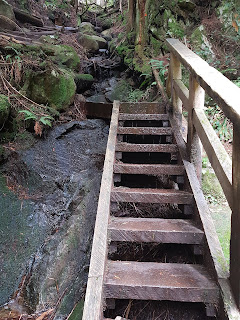 The trail passes through what I think of as 'old second growth'. The forest is uniform, definitely not the mixed bag you'll find in an untouched forest, with what look like 80-100 year old Douglas Fir. Maybe the old growth was logged 100 years ago and tree-planted not too long after?  It's an eerie feeling, almost an optical illusion when you first come across it. 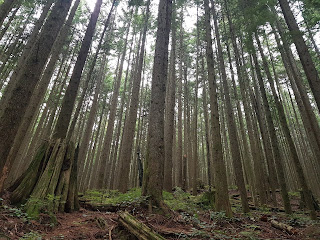 Eventually the trail enters upper parts of North Vancouver, crossing paved roads, and edging along the back yards of houses, eventually ending up at Cleveland Dam. 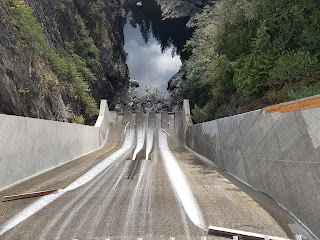