GR and I decided to try something different from our usual mountain hikes, and ride the Kettle Valley Railway (KVR) this year. It took a bit of prep; fitting the bikes, getting a little bit different gear, going on a few training runs, but by early June we were ready.

This travelogue is meant to be a companion to the 'Cycling the Kettle Valley Railway' (Dan and Sandra Langford). This book was written in the 1994 and updated in 2002. It's out of print but you can still buy used copies through Amazon. The history is detailed, engaging, and still relevant. Surprisingly, a lot of the traveling recommendations are still accurate, but not all, so be careful!

The first problem was weather. We're both fair-weather campers, no point getting wet if you can delay for a day or two. We tried to apply that to our 3 day overnighter for the KVR, but the long term weather forecasts weren't consistent, and in the end we (or I) decided to go with our original target date and hope for the best. More on that later.

The plan was to drive to Penticton, stay with sister Sue and Brian, have them to drive us to Midway with bikes for the drop off, then ride the KVR westward back to Penticton. Nice!

After a hearty breakfast from the support team, we drove to Midway for the drop off. Had a nice chat with the woman in the Midway station, got a map, and up-to-date news, then we're on our way. 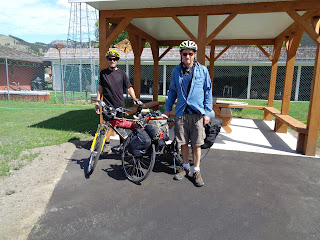 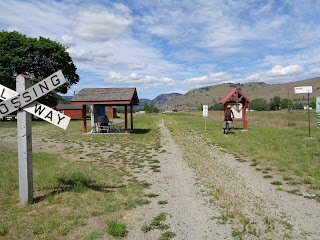 Once you get out of town, and pass under Highway 3, it's a beautiful ride following the Kettle River north. Some of the trail goes through farmer fields where there are many gates to navigate. We even saw some 'floaters' coming down the Kettle River. 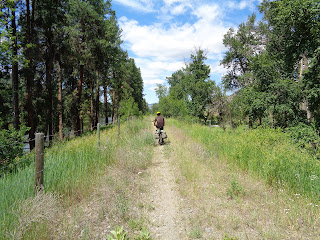 First stop was at Rock Creek campground. There's a store here where GR purchased some refreshments. The campground is a large green field by the river, with all the amenities you need. There seems to be public campground on the opposite side of the river. Not quite the right location for us to camp, too close to our starting point. Also, if coming the other way (north), it's not that far to Midway, so would probably keep going. Be aware the store (and maybe the campground office) close at 5pm.


Travelled through a number of stations, on the look out to stop for lunch at Rhone Station. The book calls this a KVR Cyclists rest stop as initiated by Paul Lautard. It's a great place to stop and have lunch, and by the writings on the walls, it looks like it has been well used in the past. There's a railway car (locked) that looks like an office and a covered area. However there was no one around and no water. Had a nice lunch there before moving on. 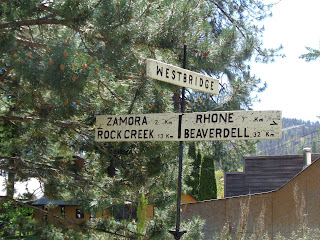 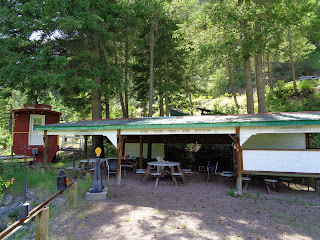 We were looking for a swimming hole mentioned in the book(km 47.3). Looking back, I think it's where we saw a picnic table on the river side, but for some reason we didn't identify it at the time.  We eventually stopped at about km 50, rode across a small field to the Kettle River, and had a quick dip.

Eventually made it to Beaverdell at 7:45, just in time to grab a few cold ones from the General Store (closes at 8pm!), and get good advice as to where to camp. We were expecting to camp in the RV/camping site, but the store recommended 'Zach's on Fifth'. (Not hard to find, ask at the store or follow the signs). Zach has a nice little setup, basically a big back yard with a creek at the bottom. Set up your tents wherever you find room. $15 per person. Hot showers and indoor facilities. Nice! 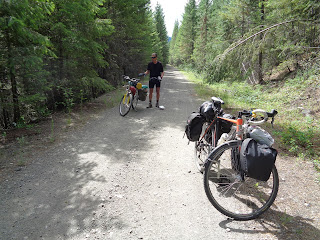 On our way the next morning by 10am. The weather looked cloudy, but we were hopeful. Quick stop at Carmi station to get the book stamped (there's still an old stamp at the kiosk). 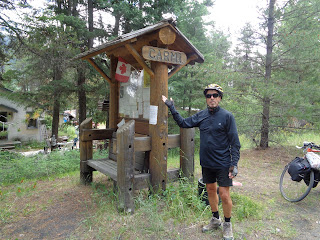 Then onto Arlington lakes, where we stopped for lunch. We thought the big slough on the west of the trail was the lake, so stopped on a ledge overlooking for lunch, but it turns out the campground and day use area is another km further on. Nice campground that's also accessible by car. On a nicer day, we would have stopped for a swim, but as the clouds were looming, we carried on. 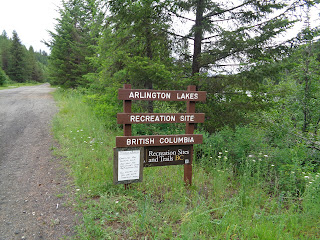 Shortly after leaving Arlington lakes, the rain started. It was start and stop for while, but then it didn't stop. There were still a few obstacles as well. Some large puddles that we skirted the edges of, and yet another (near Wolf Creek km 105.4) where there was no skirting. Someone has nicely carved a 50m push-your-bikes detour through the woods to get around this one.


The Hydraulic Lake forestry campground just prior to McCullogh station(follow the signs) looks very attractive, but we were hoping that the McCullogh resort would be open and we could get a cabin.  Alas, the resort was closed (this is one of the few places where the book does not match reality). 'No Trespassing' signs on the locked gate. Fortunately, we discovered a Plan B that successfully got us through the night. << Details Redacted>>

There's cel-phone service here, so after checking the weather for the next day (not good), I made a phone call to Chute Lake Resort and booked a room for the next night. We had planned on camping, but we knew we would be wet and opted for the easier option.

Cold and gloomy as we started out from McCullogh station. Fortunately we were warm and dry to start. After filling up with water again at Hydraulic Lake, we carried on. This was supposed to be our glory day: riding through the Myra Canyon trestles. We stopped at Myra Station for a coffee. There's a food truck, and bike rentals here. Lots of people drive to Myra station, probably from Kelowna, rent bikes and ride to Rose station and back.

We got a little ways into the trestles when the rains started. We stopped at a resting hut to wait out the rain, but it wasn't stopping. After putting on all our clothes, plastic bags on my feet, and chewing down as much of Brian's home made deer sausage as we could, we braved the rain and pushed through the trestles. We will definately need to go through this again when we can look around! 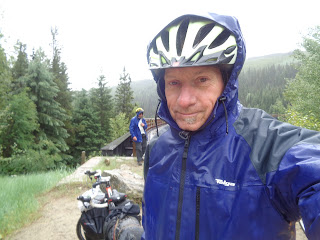 Eventually made it to Chute Lake Lodge. That was a glorious site to behold, and expanded our room count to one each. Good idea, as we had our rooms draped with wet clothes. 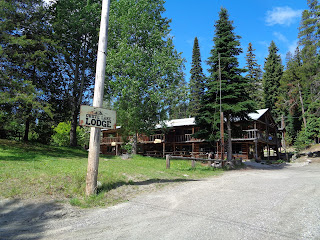 Had a hot shower and down to the restaurant for burger and beer before 7pm closing.(Chute Lake Lodge: $115 per room. $5 for towel, $15 burger, $6 beer. Get there early. Restaurant closes at 7pm. Office was closed by 8pm)

At Chute Lake Lodge we met another bike traveler named Dennis. He had a somewhat different plan: travel light with no tent or sleeping equipment and stay in lodges or B & Bs. The previous day he traveled from Greenwood to an AirBnB near Carmi Station (search for AirBnB near Beaverdell). Then was planning on pushing through directly to Penticton. However, he ended up staying a night at Chute Lake Lodge where we met him, mostly because of ghastly weather and not one, but two flat tires near Wolf Creek. Dennis is an adventure tour guide and Ironman so it was encouraging that we could handle the same trail as him. It was a pleasure and inspiration to meet Dennis!

Sun was shining as we left the lodge at 10am, but it was still cool. We stopped about 4 times on the ride down to Penticton to progressively shed layers of clothes. The nice part: it's all downhill, but there's some sandy bits. Dennis had told us it would be a 'soft' ride down. I thought he meant muddy, but it's sand. You can steer through it with momentum, but I sure wouldn't want to be climbing this bit. 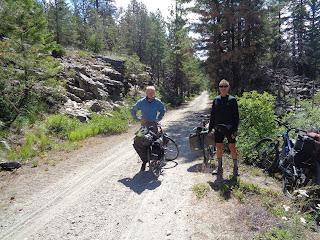 Stopped and looked at Adra tunnel, which is closed as of this writing. Now that that the trestles have been re-furbished, it appears the next project for the KVR is to open this tunnel. For now, there's an easy detour. 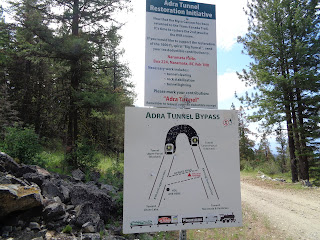 Interesting stop at the rock ovens in Rock Ovens Park. The KVR has many rock ovens along it's path. According to the book, they were used to bake fresh bread for the workers. This park exposes two of them in what was once a workers camp. 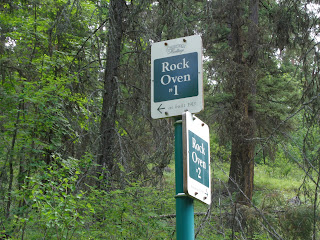 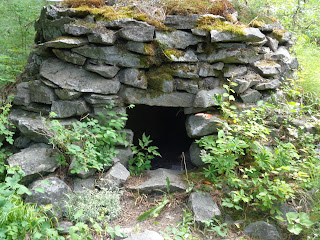 After the 'Little Tunnel', civilization hits. The trail is maintained, and the ride is much smoother. Day trippers coming up from Penticton are a common sight. Nice glide down through the vineyards (not stopping for any tastings!) with a great view of Okanagan lake, and into the city. 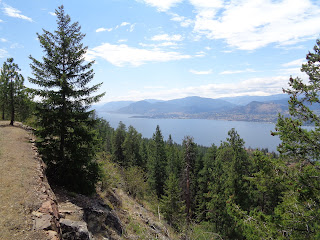 Interesting that the KVR goes right through the heart of Penticton, as what looks like a normal bike lane. It was easy to find our way from there and head back to base camp.


Our wonderful support team (Sue and Brian), had cold beers and plates of ribs ready for us. Thanks to them for hosting, drop-off and fueling!