Mt Harvey - from the backside

Mt Harvey has been on my list of local peaks to bag. I can still recall camping out in Magnesia Meadows on our Howe Sound Crest Trail(HSCT) trip with the east face of Mt. Harvey looming over us.  GR suggested we take a crack at it as our first foray into the mountains for the year. He's been up many times, but this would be my first. 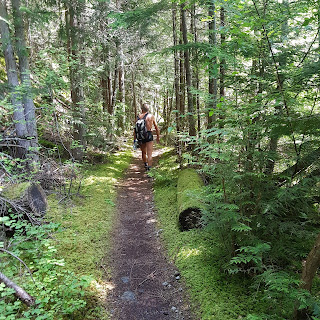 Parking restrictions in Lion's Bay (the starting point) have become increasing restrictive the last few years, and there's only 8 parking spots at the trailhead, so we parked at the school and walked up the road to trailhead. It's intoxicating, that first step into the woods, even though it's an old gravel logging road, not a real trail. We met some kids going to tunnel bluffs, taking the Brunswick mountain trail, as we continued up the road to The Lions and Mt. Harvey trails.

We must of have been yakking as somehow we missed the trail up to Harvey (oops) and (unknowingly) continued on the trail to Lions.  At a juncture where the real Lions trail starts, we met two German women hiking up the Lions to camp. We carried following a sign that read 'Harvey Valley'. I was a bit suspicious but I figured it would also lead to the mountain. GR kept saying 'I don't remember this part'. After bushwacking through a swampy valley ('I really don't remember this part'), we decided to stop and get the map out. I took a GPS reading on my phone, and we identified our location as way off the Harvey trail, on a seldom used trail that used to be a road up Harvey Valley.


It was decision time. Go forward or back. We could see that we could possibly carry on, but didn't know the route and wasn't sure about the climb up the east face of Harvey. We delayed, and hiked a bit more until hunger struck. I sat down and ate and filled my bottle from a stream. We had decided to turn back but then did another GPS reading and saw how close we were to the HSCT, so on we go. (See map below) 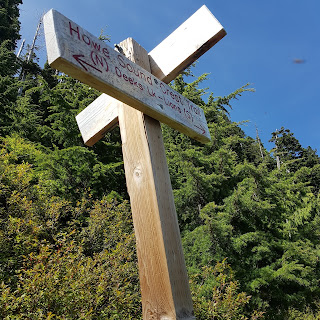 It was nice to see the HSCT sign and we started north back towards Magnesia Meadows, then taking the Mt. Harvey east trail. This was the part we were concerned about, but it turned out to be a beautiful scramble up a not too steep face that turned out to be the highlight of the trip. 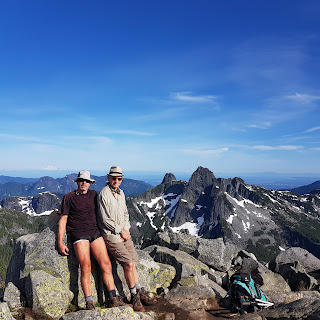 On top we met a young woman from Chilliwack, who had hiked from our same starting point to Brunswick, then along the HSCT south and up the same scramble as we had just done. She was glad to see us, as she wasn't sure she could go down the west side of Harvey. After a few pics and a nice chat she started down the west side and we followed a few minutes after.


All in all, a great hike. It's always great to fit in a looper. 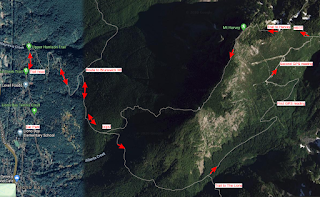